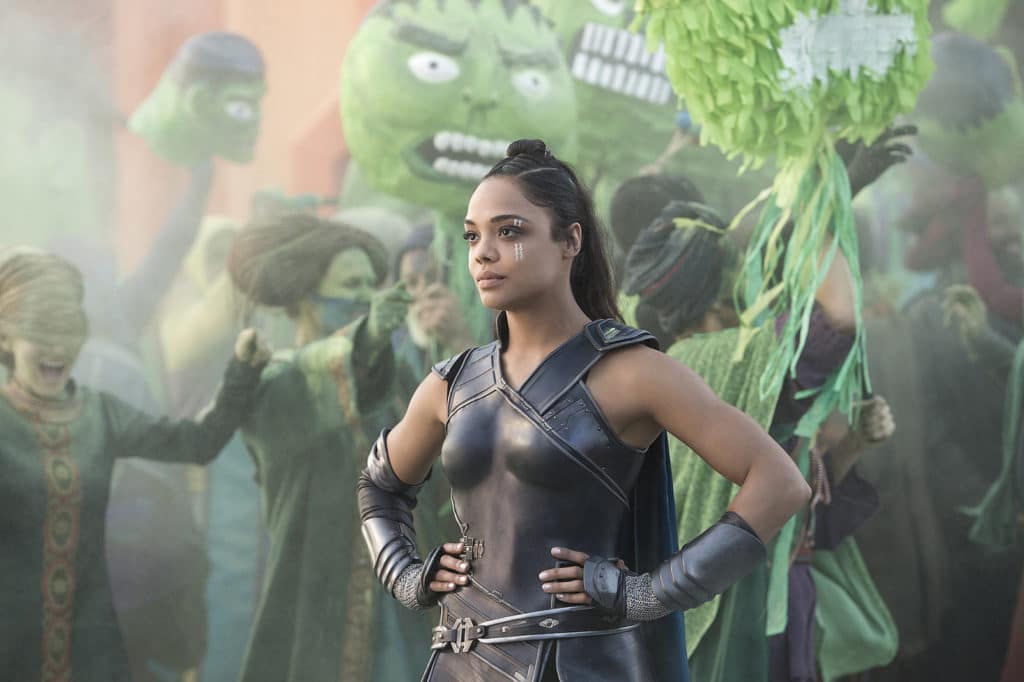 First of all, Tessa Thompson is a badass. Third of all, before you start crying about spoilers, ain’t none. Because there is a way to reflect on something without giving away the details. I’m talking to all of you Queen Sugar spoilers out there. At any rate, because I love Marvel and Thor is one of my favorites, I saw Thor: Ragnarok (and enjoyed it). Because I love Black women, I saw it with the same lens I always use. The one that wants to know what the messages are to and from Black women in any given space. So here are a few things I learned and confirmed watching Thor: Ragnarok.

Even warriors self medicate

Much like Valkyrie, we all traumatized. Even the superheroes among us. And with that trauma comes the need to forget some things. We find ways to erase and they aren’t always healthy. Food, drugs (street and prescription), sex, alcohol and products temporarily distract us. Thing is, many of the folks around us really don’t care so long as they get what they need from us. So we gotta do better about holding each other accountable. I imagine if there was another sister on Asgard, she would have called Valkyrie in like, “Sis, you been hitting the bottle quite a bit. Want to talk about what’s going on? Ever considered therapy?”
But much like Olivia Pope, Valkyrie surrounded by everybody but other Black women. Squad is necessary. Because don’t nobody love Black women like Black women love Black women. That don’t mean we won’t sometimes help each other forget. It does mean that there is someone around who will help you process why you self medicate and love you through healing.

We always gotta go home to save some shit

We leave home. In part because it’s the most dangerous place to be a Black girl. With over 60% of us being sexually assaulted/abused before the age of 18, and overwhelmingly by someone we know or trust, home is too often where the hurt is. Between sexual violence and domestic violence, home can be emotionally and physically fatal. So we bounce. But that survival strategy usually requires that we leave behind people we love. And even when we manage to suppress the events of home, our spirits remember the people. Without regard for our own healing, and sometimes fully aware of the regression our return will cause, we go back for them. Our siblings, mothers, aunties, cousins and friends. Because socialization of self-sacrifice. Or love. It be hard to know which sometimes since they both hurt like hell. So we go back during every school break to handle stuff our brothers who been living at home could have handled. We send back money from our minimum wage or barely living wage checks. We offer couches to others who make it out. We pay for collect calls from family members doing time. We serve as counselor, social worker, paralegal, and pit bull. Meanwhile managing all of the other things life requires. Like survival.

Sometimes you don’t want to save shit, but you do it anyway

We be tired. But from birth folks have told us that we have an obligation to help others without regard for the cost to ourselves. It’s so deeply socialized that all somebody gotta do is briefly remind us (or guilt us) that Black women ‘posed to save the world so we ain’t got time to be tired. Or sick. Or hurt.

The people asking you to save them often don’t look, live and love like you

Valkyrie was trying to save a planet where she was a minority. Note that damn near half the save Asgard team was Black, we barely see Black folks being saved. Basically, Asgard white as hell but Black folks risked life and limb to save them. Which is how it works on earth too. Because the liberation of Black women, specifically those of us who live at the busiest parts of the intersection, will necessarily free those who live at each single axis. So if approached from the standpoint of eradicating all forms of oppression against Black women, we eliminate all forms of oppression against all people. Doesn’t work that way with other groups. If you only eliminate harms to white women, racial oppression remains. If you focus on harms to Black men, sexual oppression remains. And so on. But since Black women are people of color, LGBTQ, poor, differently abled, and women etc., freeing us means freeing everybody. We be on some collateral Captain Save ‘Em type ish. Thing is, that means we have to (and will) free even folks who oppress us (I’m talking to you 53%).

We stay strutting through chaos

The world could literally burn around us and somehow we grab the water hoses while simultaneously looking like we walking a runway (not for Marc Jacobs though, he racist). It’s a blessing and a curse. Because folks see this and swear we ain’t never tired, or vulnerable or sick of saving them.

Valkyrie is bisexual. Tessa even tried to get them to make it clear in the film. But they was like, nah. We just need Valkyrie to save Asgard. We don’t need her to be human and intersectional.

White women ain’t always fighting for the same things, they be fighting for control of the patriarchy. And that ain’t liberation. That’s just changing the face of the oppressor.

It’s like when you’re saving someone who is drowning and they fighting you such that if you keep trying to help them y’all both might die. Except some white women ain’t fighting unconsciously, they fighting because they wanna make sure you drown just before you reach the shore so they can swim the rest of the way to safety and leave your Black ass under the water. They’ve done it before. Suffrage. 53%. Cheesy selfies with cops even as we beg cops to stop killing Black folks. For some white women, the elimination of patriarchy is just the empowerment of white women. Ain’t that some shit.

To be clear, Tessa Thompson is a badass (it’s worth repeating). But Thor:Ragnarok portrayed Valkyrie like the world wants us to be/stay- strong Black women who will compartmentalize their own hurt to save a bunch of folks who will oppress us as soon as we free them. I can’t wait to see what happens when a sista got squad. Dora Milaje.

On the Naming and Shaming of Quvenzhanè Wallis