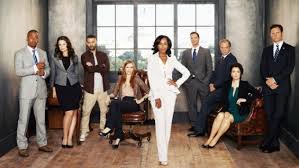 Olivia Pope once held a golden ticket to safety in the event of Armageddon. No less than 3 men have professed their love for her in the last season alone. Pope has a ride or die crew that would give their lives for her (Gladiators, in suits). She is the daughter of arguably one of the most powerful men in the world and mistress to another. Add a wardrobe envied by most women, lips that probably have their own insurance policy, a walk that makes everyone pay attention and Olivia Pope is one bad mother…(shut yo’ mouth).

Most recently, I’ve come to think more about what Pope doesn’t have—relationships with other Black women. Sure, her mother recently surfaced but she’s kinda sorta definitely a cold-blooded killer. I imagine that makes it difficult to have meaningful relationships (that whole Pope is a Homewrecker thing aside).

So where are the Black sista friends/mentors/gym buddies? We do know that Olivia attended very prestigious schools and wealth disparities make it likely Pope had few, if any, Black female classmates. We also know that the political realm within which Pope operates is also a predominately white male culture. Still, Olivia lives in or near the nation’s capital and just about half of the population in D.C. is Black. We get nothing. Not a phone call to a Black girlfriend to discuss Fitzgerald Grant’s latest faux pas, not one admonishment from a second mother about letting that good Black man get away (Senator Edison Davis) and no aunts to repeatedly ask her, “When you gon’ settle down and have some babies?”

Pope has a habit of fixing broken people. She saved Abby from an abusive relationship, Harrison is a white-collar convict, Huck is a trained assassin tortured by B613 and Quinn…well, that chick has a whole lot going on. Perhaps Shonda Rhimes didn’t feel the need to add yet another broken Black female to prime time. Maybe the absence of Black female relationships explains Pope’s own perpetual brokenness as a result of losing her mother at such a young age. One of very few moments of Pope’s non-romantic vulnerability is when she hugs her mother goodbye.

We’ve seen how Olivia interacts with people of various races, ages and sexualities. What we haven’t seen is Pope having meaningful interactions with other Black women.  The show’s newest teasers imply that we will be seeing more of Pope’s mother. It will be interesting to see how Rhimes plays out the complexity of that relationship.