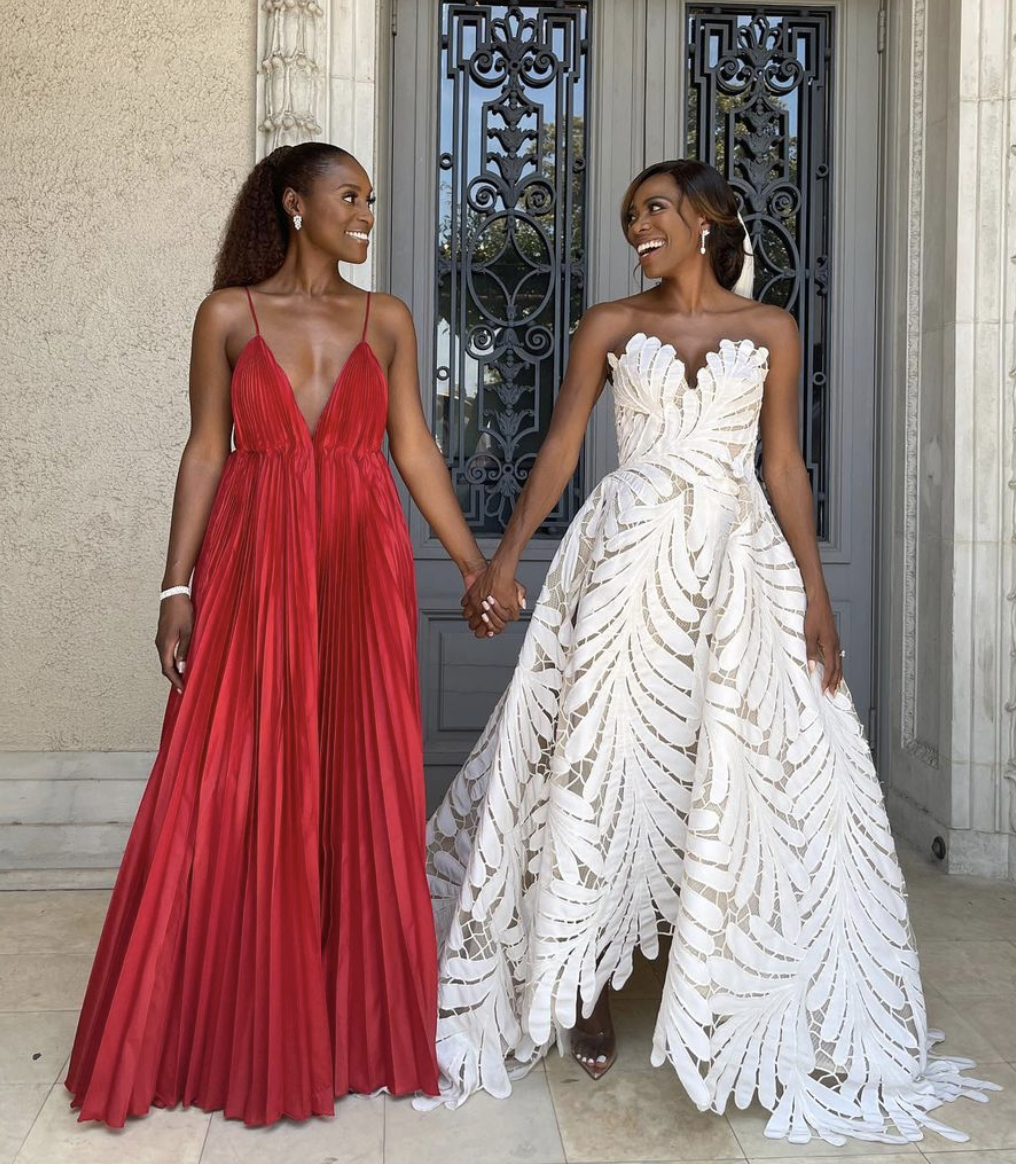 Listen. The anticipation of the end sometimes feels worse than the end. I know because I’m writing this part before the finale episode even starts. I’ve loved this show from season one. From Molly’s dating shenanigans to the time Tasha dropped that good word, from the exploration of Black women’s sexuality to the excavation of Black women friendships and the #teamIssa #teamLawrence divide, Insecure did what great art does. It kept us talking. Questioning. Reflecting. Critiquing. As much as it saddens me that this is my last post on Insecure, they left us with life lessons. Here are a few from the series finale:

For five seasons we watched Issa, Molly, Kelly and Tiffany continue to choose each other, even through beef many of us wouldn’t have survived with a friend. Sometimes it looked like a lot of work. It was. Sometimes it looked like they needed to take a break and do some internal work before coming back together. They did. Great friends are worth it. As Yvonne Orji said on Instagram, Issa was always Molly’s true love.

I’m glad I learned this lesson earlier in life. I got five soulmates (yeah five, step ya game up) and ain’t another soul in this world gon make me give up any of them. I’ve kissed two of them in the mouth which might make some potential partners uncomfortable. But they my soulmates and they gon be there through all the heartbreaks and mistakes. I’ve learned more about love, respect, intimacy, vulnerability and communication from my friends than from any romantic relationship. My friends have taught me to be a better friend and a better human. Any romantic relationship I enter is under the condition that it’s understood I’m not giving up my soulmates and if forced to choose, I will always choose them. When you find your people, hold on.

Focus on your friends and celebrate them.

We’ve seen it to various degrees on the show and even saw some regression within the friendships. Molly and Issa celebrated and focused on each other. Problem in previous seasons was that the focusing and celebrating was often one-sided. That’s not to say that sometimes it won’t be 80/20 or even 90/10. Hell, there are even times when it will be 100/0. But it can’t skew that way too often for too long. In the finale, we saw Molly and Issa celebrating and focusing on each other. They had their own moments and even though they were still checking in on each other, they let the celebrated friend have her shine.

The focus/celebration doesn’t always have to come in the form of a party. It often won’t. Focus might look like letting them vent and holding what we wanted to share. The celebrating might be just the two of you.

It could look like acknowledging the things they don’t even see as wins or checking in when you know they need extra support.

Fuck n*ggas, even the ones who think they good dudes, stay moving on. So should you.

We watched Lawrence move on bout fifty leven times. In between all the figuring it out with Issa, Lawrence never lacked for company. Maybe you trying to figure it out too. But don’t put your life on pause while you do so.

There is always gon be some shit.

Life gon stay throwing shit at us. That’s one of the few things we can count on. So we got to be intentional about looking after the people and things that get us through. I was somehow lucky enough to end up living in the same area as 4 of my soulmates. But life, careers, DMV traffic, Rona and her cousin Omarion don’t make it easy to connect in person. We make use of phones, Facetime, texting, gifs and memes. Despite the distance, we’ve managed to grow and maintain our friendships. It’s tempting to put folks on pause when some life ish smack us in the face but those are the very times we need to make sure we’re connecting. As we saw with Issa giving Molly space to grieve, good friends also recognize when you do need to pause and stay posted when you ready to tag back in.

Put your friends on.

You can change your mind about Denver. Or anything else.

So apparently Tiffany the only one who didn’t get a happy ending. Wonder if that was a little bit of petty popping through given cast dynamics. I digress. But while she was happy for Kelly’s news, last we saw of Tiffany she was miserable in Denver. Which brings us to the topic at hand – if you make a move and you don’t like it, undo the move. Or make another move.

Thing is, plenty of folks would have looked at that spacious house and assumed Tiffany should be happy. Don’t matter what other folks would be happy with/grateful for, if it ain’t fulfilling you, make a move. Be a Molly/Issa/Kelly and get your actual happy ending.

From we got y’all to I got mine – get your own sib.

And I ain’t on no “get you an LLC” with no plan. I’m talking about building boo. Building you. Your brand. Your business. We saw Issa go from being undervalued and underpaid working at a nonprofit led by white woman who knew little about serving Black and Brown kids to Issa being able to fill needs in her community based in part on her own lived experiences. Folks gon swear that whiteness and titles give them authority and expertise. All it does is give them privilege. Sib, your lens is unique, important and necessary. It allows you the vantage point of knowing the true needs of your community. Don’t let folks who want to be saviors tell you otherwise.

Of course, it ain’t everybody’s desire to have a business or a brand. Nor should it be. It also takes resources to get your own with time being one of the most crucial resources. You can still get your own even while working for somebody else. Part of that is recognizing your worth and setting boundaries.

Give your friends space to grieve while affirming your presence.

Grief. It’s ever present for those of us who have lost someone close. Even our best friends might be at a loss for what to say or how to help. The reality is that there isn’t anything we can do to take the pain away. They just need to know you’re there. We saw Molly dip out when she needed to process grief and we saw Issa give her space to do that. We also saw Molly show up when Issa was grieving her relationship(s) after Issa said she wanted to be alone. Friendship requires learning our friends. In doing so you can find the balance and learn when to leave a voicemail, send a food delivery or show up at the door anyway.

You decide when to get off the merry go round.

Or as I say, “love until you get tired of loving.” I been #teamIssa and truth be told, I did not want her to end up with Lawrence. Or Nathan.* I did want her to end up happy so I guess it’s fine. Folks gon be with people we don’t necessarily see it with. But they won’t walk away unless and until they are ready. Sometimes they’ll walk away and go right back. Outside of abusive relationships, I support folks loving until they tired of loving.

*I was rooting for Daniel.

Commit to folks who love and respect your whole person.

Molly finally got that with Taurean. In previous relationships, the men she dated simply weren’t willing to or capable of loving her whole person. To be fair, Molly’s whole person can be a bit much. It’s all about finding somebody who match you. Not just match your fly but match your life. If y’all can kick some ass in the office and plot on eating all the food in a munchie induced frenzy together, might be a match.

Sometimes your version of happy changes.

All of that is perfectly fine. We evolve. It makes sense that our version of happy does too.

It ain’t a vacation if ya pussy ain’t broke.

What’s understood don’t got to be explained.

If you been watching from jump, you know that moment brought us full circle. Insecure gave us so many things. Art. Beautiful ass Black people. Reflections. Frustration. Debate. Laughter. Tears (you cried with Molly and Issa too). It’s been a journey I’ve certainly enjoyed.

As the kids say, Insecure owes us nothing.

Where is the Love? On Queen & Slim and Black Girls Deserving Better

On Black Women, Reality TV and the Monopoly on Violence