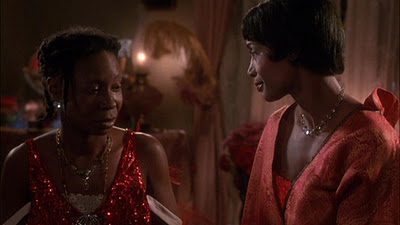 If I mention The Color Purple and you don’t know what I’m talking about, I question everything about you. Like your very existence. Alice’s Walker’s seminal text, The Color Purple is like playing spades and the electric slide— if you show up at the Black family reunion, you better be familiar. I’m talking ability to drop random quotes in conversations familiar.

Me: You and me us never part *insert hand motions*

Me: Til you do right by me, everything you even think about gonna fail…

My little sister: Girl, why you trying to put the Mister curse on me? You tripping, all I did was eat the last of the mac and cheese.

My auntie Lemme’s mac and cheese is enough to Mister curse somebody over. I digress. By now you should know that’s just what I do. At any rate, the last few weeks, the Bey/bell dialogue/debate and subsequent drawing of feminist lines (i.e what constitutes “real” feminism) got me to thinking about what’s happening in this space. Even my other post about Cardi B and Melissa Harris Perry drew a few side-eyes because according to some folks, it’s feminist blasphemy to even mention the two of them in the same sentence. If you agree with that notion, you might want to use your church finger right about now because it’s about to get feministly sacrilegious up in here. That’s a thing. I coined it just now so cite me when you use it.

So in the spirit of understanding why it makes perfect sense to mention Cardi B and MHP in the same sentence, and why both Beyonce and bell hooks are integral components of Black girl liberation, I turned to two women who, but for being thrown together by the men in their lives, may have found themselves on opposites sides of the bell/Bey or Cardi/MHP binary—Celie and Shug.

We know a few things about the two women whose lives were initially intertwined through Mister. Celie loved her some Shug. And Shug loved her some life. But Celie had no life and Shug had no love. We watched (and/or read) Celie navigate a life of constant pain. First in the repeated sexual assaults perpetrated by her—at the time thought to be—father and in being denied the opportunity to go to school in addition to carrying the entirety of the domestic load. Years of sexual abuse produced 2 children, both of which Celie was forced to give up for what we later learned to be adoption. In the spirit of the times, Celie went straight from her father’s home to her husband’s home, a suitor who initially had his eye on her sister Nettie but was denied by their father on account of Nettie having at least some value in his eyes. That same sister served as Celie’s rock through all of this. While she transitioned between physical homes, Celie’s roles remained the same. In her husband’s home she was again subjected to repeated sexual assault (if the marriage was not consensual, the subsequent consummation of such was also not consensual) and forced to serve as caretaker (you saw Mister’s bad kids), cook and maid. When Celie’s sister joined her at Mister’s residence, Celie got a few moments of respite in finding comfort with the sister who had always loved her and shared everything, including the formal education Nettie received.

But Mister is Mister so he eventually found a way to take away the one thing Celie had to claim in the world. After Nettie rebuffed his sexual advances (attempted sexual assault actually), Mister kicked her out of their house.

And Celie was alone.

Alone attempting to survive the manifestation of patriarchy in the form of Mister. Alone navigating what it meant to live as poor, Black and woman in a world where all of those things rendered her invisible save for the services she could provide for everyone else. Alone in the mourning of her children. Alone in coming to terms that the only men who had ever touched her did so without her consent. Alone.

And then there was Shug.

Because Celie was invisible to Mister, he had no qualms about bringing his lover to their home and having Celie serve as her caretaker. Shug was everything Celie was not. Outspoken. Comfortable with her sexuality. Desired by men. Sangin’ her heart out. She was a force to be reckoned with. And much like the men before her, Shug immediately made it clear that she thought Celie sho’ was ugly. In that declaration one thing was clear/different from those men, Shug saw Celie. Even as Shug perceived what she saw as ugly. Because the truth of the matter is that Black women who see other Black women as ugly, unworthy or unlovable are really Black women who see their own pain reflected in other Black women. They are really Black women who have never been, or allowed themselves to be, loved right by other Black women. Because patriarchycolonialismracism.

Ultimately, Shug and Celie bond in the proximity of their shared physical and emotional space. Celie explores her sexuality and Shug explores her worth. Turns out in all that living, Shug was just looking for love. And in all that loving (of Nettie, Shug, the children she had never met), Celie was also looking to live. They found that in one another. An interdependent relationship that would evolve over the years based upon both their mutual and exclusive needs.

The Celie-Shug relationship is missing in a lot of the Bey/bell, Cardi B/MHP conversations— discussions about the necessary level of intimacy between Black women required to fully liberate ourselves. That Shug and Celie shared a physical relationship is not inconsequential. For Celie, it was her first consensual sexual encounter. That level of intimacy required trust that Celie rightfully feared giving to anyone. In the same way, having been rejected by her father and subsequently objectified by most people around her, Shug removed her own barriers to trust in her emotional relationship with Celie.

On Black Women, Reality TV and the Monopoly on Violence