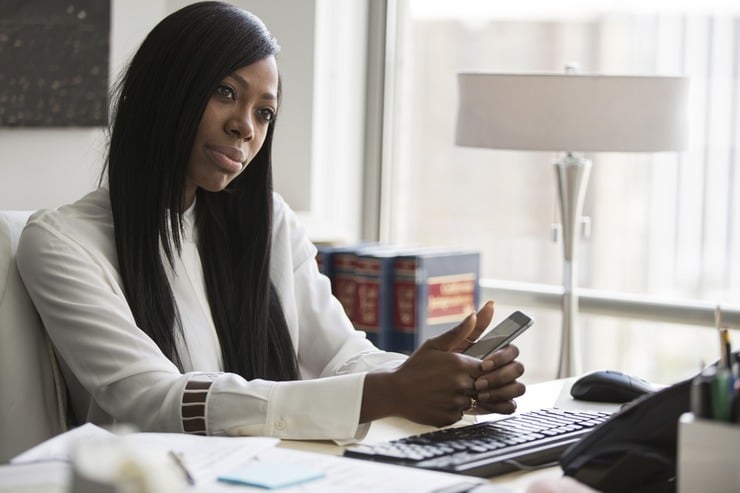 Molly, You In Danger Girl: On Insecure, Dating and Prejudice as Standards

There are two things I never discuss here (or in any social media space)— my life as it relates to finance and romance. As far as the interweb in concerned, I’m broke and can’t keep a man. Thankfully, The Year of The Black Girl (2016- Infinity) gives us a ton of cinematic spaces through which to explore Black women and love without me telling y’all all my business.

Issa Rae and squad continued the year’s #BlackGirlMagic theme with Insecure, a show centered on the life of main character Issa and her best friend Molly. Issa works for a non-profit organization focused on Black youth. She is the only Black employee (if you look straight ahead, won’t nobody around you know I’m describing your life, too). Molly is an attorney and almost the only Black employee. Her firm hired another sister who didn’t quite fit the “workplace culture” so we have yet to see if she sticks around. Just keep looking straight ahead. In the non-profit industry and corporate America, one thing remains consistent– microaggressions everywhere. More than one friend has said the show is hard to watch because it is so spot on in its depiction of the workplace. They ain’t never lied. The invisibility. The burden of representing your entire race. The male who says exactly what you just said and suddenly it’s the best idea everyone has ever heard. The identity performance and code switching. The mask. The masks.

That’s all dissertation length/worthy material so I’ll get back to the romance. While Issa is in a long term, live-in albeit complicated relationship, Molly is frantically searching for love in the way that Black women do in 2016– on the Internet. I laughed to keep from crying more than a few times when she discussed her experiences on the TV version of Plenty of Frogs (I said it right) while she sits on a waiting list for an elite online dating site. There are social media pages devoted to the types of messages women receive on these sites. Some are hilarious. Some are downright scary.

Meanwhile, Molly got options. Well, Molly got an option. Jered, an attractive and personable brother she met at an open mic spot. But Jered doesn’t have a college degree and works at a car rental company. Although Molly doesn’t initially appear to find these things problematic, her friends’ reactions to the news makes it clear they think she’s dating beneath her. So when the elite dating site has an opening, she dumps Jered quick fast and in a hurry when they send Chris (played by Jidenna) her way. Chris is everything that Jered is not. Formally educated, successful in the corporate world and a borderline jerk. I say borderline because Molly herself contributes to his actions and because he oddly enough thought that he was helping her by giving her false hope for a good 10 mins by publicly proclaiming to be her man. To Chris’ credit, he immediately clarified that he was only trying to help since Molly seemed like she could use “a win.” You can’t do that to a 30+ single woman. Even if you are Jidenna fine. Let me help you brothers. If you publicly claim a 30+ year-old woman, y’all go together. Forever. *In my Cardi B voice*

So when Chris makes it clear that he isn’t looking to be Molly’s man, she gets drunk and ends up at Jered’s house. While he initially tells her to leave, he eventually puts her to bed on his couch. Because Jered is a considerate human being. And when she’s sober the following day, they hook up. Now they go together. At least in Molly’s world because Molly needs a man. Any man. Things go well until a night of sharing reveals that Jered has had a sexual encounter with a man. Mind you, this is after Molly tells him that she kissed another woman in college. But Jered’s revelation is a problem for Molly so she takes it to the Black girl tribunal (her homegirls) which promptly informs her that she has to end it because Jered is gay. Apparently Molly’s same sex encounter doesn’t mean anything with regards to her sexuality. “It’s different for women,” they said. Different as in the patriarchy doesn’t frown upon it because lesbian women aren’t a threat to notions of masculinity. Another dissertation. After cracking a few jokes, Issa does tell Molly that if she likes Jered, she shouldn’t let it stand in the way of being with him. But Molly. So she dumps Jered. Again.

Molly, you in danger girl. From yourself. To be clear, I don’t believe in the idea that single people must lower their standards to find love. Still, we have to examine standards vs. prejudice. What’s the difference? Well, if hiring or firing someone based on your standard is illegal, there is a good chance it’s a prejudice. Preference might make it more palatable but a rose by any other name still got thorns. And if your standards are grounds to dismiss someone whose company you enjoy, then you’re likely standing in your own way. Standards on the other hand are those things necessary to maintain a healthy relationship like respect, consideration, genuine interest in who you are as a person. All characteristics Jered possessed. But Molly. I have a feeling she’s going to continue working my nerves.

Issa and squad hit the real life nail on the head. We all have the one friend who stands in their own way when it comes to dating and conflates prejudice with standards. Hint: If you can’t identify that person in your crew, you just might be them. Keep looking straight ahead. Sure, we all have deal breakers and in fairness to others should let those be known up front. For example, if you know that children aren’t in your future, you probably shouldn’t date someone who wants a big family. It benefits no one to waste time and energy, especially if you’re hoping to change folks. And as for those physical “standards” (i.e. height, weight, hair type etc.), you know good and well that’s just prejudice. Perhaps Molly (and the rest of us) would fare better to get to the root of her prejudice. Why, and where, did she get the idea that formally educated men were the only acceptable partners? What, if anything, are the traits she finds desirable about such men? Does she view college as an illustration of their being able to stick with a long term goal? Certainly that can be displayed in other ways. Perhaps it’s just the social stigma (in some circles) of not having a degree as displayed by her friends. Have those same sort of standards been communicated by the men she dates? What sort of relationships has Molly been exposed to that lead her to believe such things are integral to healthy relationships? Molly briefly discusses her parents and that probably gives us some insight. How many folks are standing in their own way when it comes to loving folks and allowing themselves to be loved? I got questions. What is clear though is that Molly has a lot to learn about loving herself. And that’s likely the key to all of this. If she doesn’t/can’t love herself fully, and if loving herself is tied to her academic and career success, if her parents’ love was contingent on such, then it comes as no surprise that she places such standards on the men she dates. But is she setting herself up for failure? I imagine we’ll get some answers as the show continues. Or maybe just more questions.

Are your  prejudices standing in your way when it comes to love?