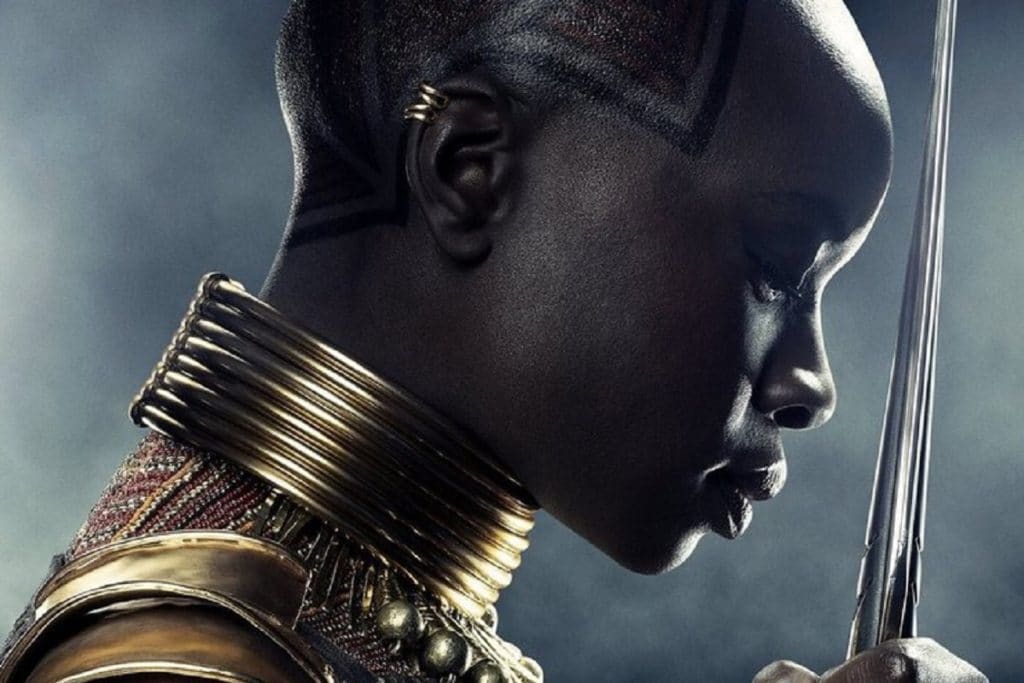 First of all, I wanna have a whole baby so I can name her Okoye. Which is fitting because it would be immaculate conception and Okoye is heavenly.

Now that we’ve established my favorite Wakandan, let’s get to the love letter. I mean, the lessons. Because real or fictional, Black women stay teaching us. Lessons I learned from Okoye:

Who you are matters, and should matter, to anyone who engages you. And they should know that from the jump.

Who are you? The question is asked time and time again throughout the film. And while the question is never posed to her, Okoye always tells you who you are, what you mean, to her. Because it matters. And she doesn’t just save that for royal folks. She addressed T’Challa as “my prince” and “my king” and just as lovingly addressed Nakia and W’Kabi as “my sister” and “my love.” When we identify folks before we engage them or allow ourselves to be engaged, we put some perspective on how/how much we want to invest in them and the interaction. Because while both can be enjoyable, “my booty call” and “my partner” simply don’t get the same level of investment.

Ain’t nobody got time to be sacrificing they mission/goals/people/time for some man who don’t even know who/what he fighting for.

W’Kabi was all set to go wreck shop at T’Challa’s command. Then five seconds later…#nospoilers but dude ain’t the one you ‘posed to be sacrificing for. Forget the potential for what he could be. Right now, he confused. And mad at the world ‘bout something that happened long ago. Which would be fine if he planned to do something about it. But not fine if he just jumps on every bandwagon that comes along in hopes they’ll help him avenge some stuff he ain’t even processed yet. You can do better sis.

We might not have the same methods and path to liberation but my heart is with you. Even when I gotta move different.

Okoye has her place in the movement. She knows who she is and who/where she serves and recognizes that others might be called to another path. And while serving your people might not be the same as saving your people, both are necessary components of the work. We gotta know our place in the movement, allow others to move different if their roles require such and let them do so knowing our hearts are with them.

Lot of folks got lots of things to say bout how we wear our hair. And sometimes we need/want to switch it up to handle some business. Maybe that business is throwing spear through a couple of colonizers and maybe that business is a Saturday night twerk session. Either way, I’ll pull out some bundles if I want and rock this natural if I please.

I been talking bout reciprocity since foreva *Cardi B voice* but I know some of us still wrestling with that concept. Still socialized to believe that as Black women we just supposed to save everybody regardless of whether they would do the same for us. Hell no. There comes a point where Okoye makes a decision to save someone. It does not escape me that she so willingly stared death in the face for them only after they had come to her rescue earlier. If you don’t pay attention to nothing else in this post, let it be this— stop risking your life, limb, and rent money for folks who won’t do the same for you. You deserve reciprocity. In life. In labor. In love.

Okoye. My sister. My love. You was preaching and teaching all up through that thang. And all while you was doing it, I had one nagging question…

Why you so damn fine?