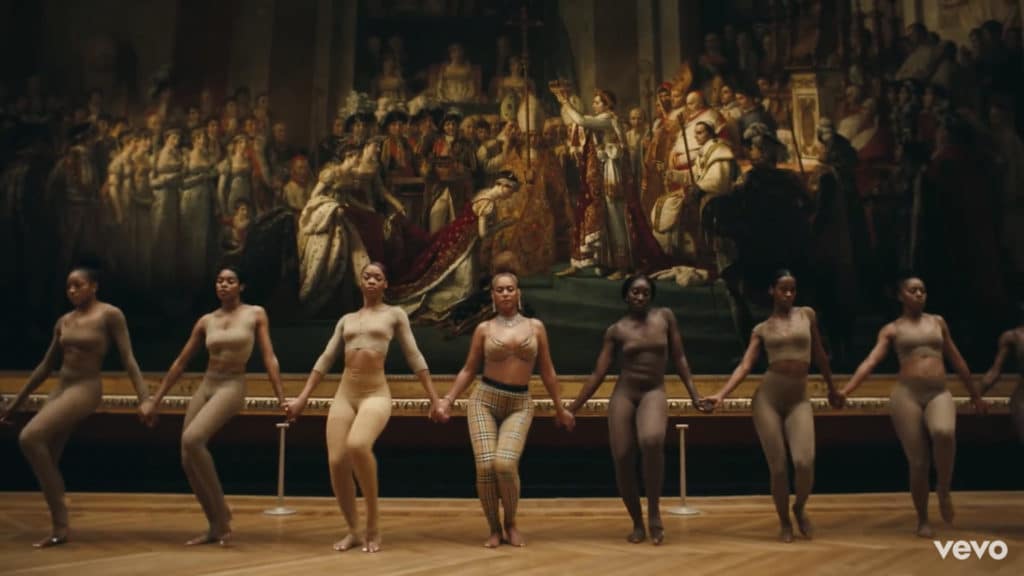 It happens every time Beyoncé drops an album. Or a video. Or sneezes. Whenever she makes a move, folks want to remind us that her movement don’t fix racism, sexism or bring about world peace. The interweb is filled with cries of, “I mean doing a Black Panther salute during halftime on one of the world’s largest platforms is fine but what is she doing for Black people,” and “She spent all that money on that video but do she donate her money to the Black community?” I’m not even going to address that latter point. If you here, you can probably find your way to the google to answer that yourself. Actually, you can google the first point too. Because this ain’t a post about breaking down every act of Beyonce’s philanthropy. Consistently though, I’ve noticed that folks across the board, from bell hooks to your neighborhood Facebook troll, want Beyoncé to do something that no other artist is called upon to do. Her work is viewed with a perlocutionary lens where the only acceptable end is the eradication of oppression. Whet? Sis supposed to fix the white supremacist patriarchy with her music? Alone? Oh, ok. They came for her. Oh, her husband was on the album too but I ain’t heard nan person ask ‘bout why Jay ain’t magically created world peace with this project or any of his solo albums.

And I was reminded, as I’ve always known but survival instincts force me to occasionally forget, the world don’t just hate Beyonce. They hate Black women. And she just happens to be one of the most visible. While I’ve felt that folks hate us from a very early age, and known since I was able to understand what misogyny is, this week the world came through with a “Hold my beer.”

Full disclosure, I’m a Bey fan. Not quite Bey Hive, I ain’t buzzing on Kid Rock’s Instagram page (or Madonna’s well deserving self), but I been had my tickets to see OTR II. That said, I’m perfectly capable of critiquing the Carters and appreciating the critique and non-reviews of others. When Bey wrong, she wrong. Like when her and Jay gave them twins those names that don’t match. Everybody knows Black twins get matching names. We like alliteration. How else folks supposed to know they twins? Eric and Erica. Tony and Tonia. Tekeral and Tekoral. And that’s just a few of the sets in my own family. If the names don’t match, you end up with a Power situation and don’t nobody know Tariq and Raina twins. Everybody was confused.

Now that I’ve proven my ability to be objective when it comes to Bey, let me back up to before The Carters dropped Everything is Love. Back to how much folks hate us. Bout a couple weeks ago, Nas dropped an album, Nasir. And folks went wild. Because Nas. Full disclosure, I ain’t heard the album. And won’t hear it. Because Nas is an abuser who abused a Black woman for years. He hasn’t acknowledged that harm nor has he attempted to atone. Does he need to do that publicly? He needs to do it in whatever way Kelis feels fit. And since she spoke publicly, seems like she hasn’t been able to get a private acknowledgement, apology and atonement neither. But folks didn’t care. The fact that Nas has beaten at least one Black woman many times, over many years, was not enough to make folks feel like they shouldn’t support his music. Because as one Facebook user essentially said after demanding proof that Nas had abused multiple women, one Black woman’s pain isn’t enough to override whatever pleasure one gets from listening to the music of an abuser.

Of course, we didn’t need Nas to know that this country doesn’t care about Black girl pain. They been drumming that into our heads since our ancestors stepped foot on this soil. But you ain’t got to go back that far for evidence of the hatred. You can go back as recently as the 90s for that. For decades R. Kelly has been sexually abusing Black girls and women. Women have come forward about the abuse suffered at his hands, video of him sexually abusing a young girl circulated in barbershops across the country, he’s settled no less than 17 cases against him for sexual abuse/assault and now his ex-wife has spoken out. And y’all still buy his concert tickets, stream his music and insist that all of those young girls and women must be lying. Because some of them took settlements. But in a world where sexual predators rarely see a jail cell, I say sue everybody. Because therapy is expensive and depression is costly. Mind you, R. Kelly picks his victims in large part because they don’t have the financial resources to withstand the public attacks against them or the costly process of things like taking off work to go to court. Like most predators, he selects his victims strategically. He selects those most vulnerable. But let some of y’all tell it, everybody lying on that fool. Because the pain of dozens of Black girls and women isn’t enough to override whatever pleasure one gets from listening to the music of a serial rapist.

Now you might be saying, “But Kehinde, the world don’t just hate Black women, they hate Black people.” To that I say yes. I also say that Black women occupy a unique space in that we get the hate from everybody, including Black men. If you need me to clarify “not all Black men/white men/white women,” then maybe you should dismiss yourself now. Because I won’t. And if you need me to do that, you worried about the wrong thing. But maybe you should go on a social media rant bout how divisive I am. Just make sure you share the link in your post and spell my name right K-e-h-i-n-d-e. 😉

So how do I know folks hate Black women more than Black people in general? I’m glad you asked. Because we just had a perfect illustration of this. In between R. Kelly and Nas, Kanye said some 53% mess out his mouth. Among a bunch of other dumb stuff, he said that Black folks chose to be slaves. And you know what happened? Folks got mad. Said they wasn’t gon listen to his album or support his clothing/shoe brands. The key difference between the acts of Nas, Kelly and Kanye? Two of them directed their harm to Black women specifically. Kanye’s statements were viewed as an attack on Blackness while Nas and Kelly’s actions targeted Black women. And this is the part where Black women are reminded that for many people, Blackness and Black liberation requires that we leave our sex at the door. Bracket it for the movement’s sake. But low key bring it in because sexual assault, domestic violence, increased rate of heart disease, maternal death and HIV certainly still see our sex within the state of Blackness.

There was public outcry about Kanye and his anti-Black statements. Meanwhile R. Kelly’s streams soared when Spotify attempted to stop promoting his music. They have since reversed their decision to not promote his music via Spotify sponsored playlists because money. And disposable Black girls and women.

Which brings us to Everything is Love. And nothing is love for Black girls and women. Because of all the valid critiques of the album and videos, the one I’ve heard the most in the social media sphere is that the music ain’t magic and don’t magically solve all that ails of the world and more specifically Black people. Here is where most folks are confused. They believe that #BlackGirlMagic is about saving the world when in fact #BlackGirlMagic is about saving ourselves.

If Lemonade was a message to Black men in the movement that we would no longer exist within a partnership/coalition whereby we are called upon to bracket the pain we feel at the hands of those we work to liberate, then Everything is Love was a message that it’s gon take some real work to heal. Somebody might be tempted to apply that to the work of Black women in partnership with white women in the women’s liberation movement but that ain’t my ministry. I digress. So if Lemonade was a message to comrades that we ain’t bout that ride or die life no more, then Everything is Love says it’s going to take an acknowledgment of the pain inflicted, an apology and sincere efforts to atone. It won’t be easy. And every now and then we gon be reminded that we shoulda…And you got to be patient. Because if you value us, if you are really remorseful for the pain caused, you will give us space to heal, you will ask what we need from you to foster and facilitate that process, you will give us time, you will reciprocate our labor and our love. You will remember that you too once hated us, or acted as if you did. And you will acknowledge that. Apologize. Atone. By any means necessary.

All I Ever Needed To Know About Life I Learned From Cardi B: On Life Lessons From Bodak Yellow