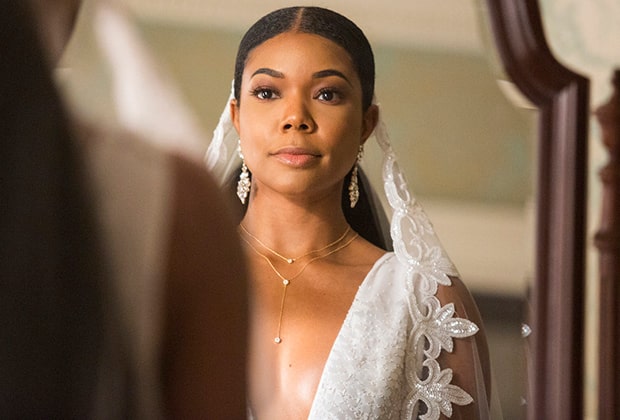 As teased in the promo, Mary Jane gets married in the finale. And since having a baby and getting married were the things she has wanted to do the whole show, this is a happy ending for her. Now I’d have made a different decision and probably *not* have married the man who left me twice, and one of those times I was pregnant. But do you sis. Quite frankly, the storyline around Mary Jane was predictable. Dare I say boring even (I still love you though, Gabrielle). And deserved. Because even though she ultimately chose the man I wouldn’t have chosen, she chose the baby she always wanted. Even if it meant the man was gone leave. Which he did. Again. Clearly I ain’t forgave brother with the light eyes. Morris Chestnut AKA Beau called him that and I’ll likely be addressing light skinned-ed brothers that way from here on out no matter what color they eyes really is. Also, I’m down for any show where you get to kiss Morris Chestnut and Michael Ealy in the mouth. I digress. Point is, Mary Jane stopped sacrificing. For some time on the show we watched her sacrifice a baby for a career and then a career for a man (getting with Justin could have ruined her) so it was full circle to see her choose a baby over everything. Finally, Mary Jane refused to put aside her desire, even if it was for her own competing desire. It wasn’t for the desires of others. Not her job. Not her man.

Of course, the show is about the title character, Mary Jane (Pauletta) Paul. But like any good show about a Black woman, her friends are a key component of the story. And it was Mary Jane’s homegirl Kara who told the story within the story. While Mary Jane was deciding between which fine ass, wealthy ass man to marry, Kara was supporting her and even actively tried to help Mary Jane make her decision. That’s what homegirls do. They be your eyes and ears when love and/or lust leave you unable to make healthier choices. Thing is, Kara was doing it all while she was literally fighting for her life. And watching her put aside life or death issues to be there for her friend’s life and love issues felt all too familiar. We gotta stop that. I know Easter just passed but the lord ain’t looking for no more sacrificial lambs. And even if they was, Black women done had our turn already. Bout fifty ‘leven times before. Somebody else can take a turn. We done. And the people who really love you want you to look out for you. Even if that means telling them you got to pause being the strong best friend for a little while. This life shit is a tag team sport. We got you when you need to tag out. And the folks that ain’t got you need to go.

Y’all know how we do it Behind the Veil so without further ado, here are some life lessons from the Being Mary Jane series finale:

1. Plenty of folks might love you. But love ain’t want. And sex ain’t love. And love ain’t like. And like ain’t sex. And you can pick and choose from that whole list. Or leave it all. Point is, you deserve what you want. But don’t confuse what somebody is willing to give you for what you want.

2. Sometimes you gotta choose whether you want the man* or that baby you been trying to birth for years. And maybe your baby is a book. Or a new career. Or relocating. Or a baby. *If you date men. Not all women do, Mary Jane does.

3. You gotta ask your friends what’s *really* going on. And mean it. And be willing to listen to everything they say, and pay attention to all the things they don’t say.

4. Mary Jane asked brother with the light eyes to tell her why he loved her. We do this with romantic partners but ask your friends too. And if all the responses are about what you do for them, it might be time to dip off like the Christ and resurface three days later with some new friends.

5. It is always relevant and appropriate to talk about sexual assault when telling the stories of Black girls and women. Shoutout to Tarana Burke for making an appearance on the show and reminding us of that.

6. If people leave because they are angry you didn’t do what they wanted you to do, let them go.

7. Turning down dependable folks for the ones who excite you… Issa mood I guess. But for me, in this the year of our lord and savior Beyoncé Giselle Knowles-Carter, I’m good on that. Excitement is cool, but I’mma need consistency and dependability. Or Morris Chestnut. All that melanin. Brother ain’t aged since Boyz. Gaht damn.

8. Kara didn’t want to interrupt what her man had going on with his career so she didn’t tell him about her diagnosis. Interrupt him sis. That’s what he signed up for.

9. PJ said rule number one to getting a man back was to ignore him. And Justin was the epitome of that. Be leery of those men. You’ll get tired of having to play that game every so often to get their attention again. Also, how PJ just pop up out of nowhere like they didn’t Judy Winslow him last season?

10. In the end sis, do you. Love who you wanna love. Romantically. Platonically. All that. I only ever ask, that you not sacrifice yourself. Just don’t get got by the brother with light eyes

11. And be careful with friends too. Because you’ll sacrifice yourself, look up years later and they won’t even show your face during the closing credits. Even if you been playing the best friend the whole damn time.*

*Note: I understand that Lisa Vidal, the actress who plays Kara, received an actual cancer diagnosis and subsequent treatment and perhaps that is the reason she wasn’t filmed in the ending wedding scene. That is the only acceptable reason for not having her there. Seeing Mary Jane get married without Kara was jarring because for many of us, this show has always been about that friendship, that love, those soulmates. And perhaps it also serves as a reminder that sometimes, when we finally get what we want in life, the people who helped us get there might not be around. So love the folks who got you. The ones who will tell you about yourself. The ones who dream and work alongside you. The ones who will put aside their pain for you. Because like Kara said, you can’t get through this shit they call life without your girls.