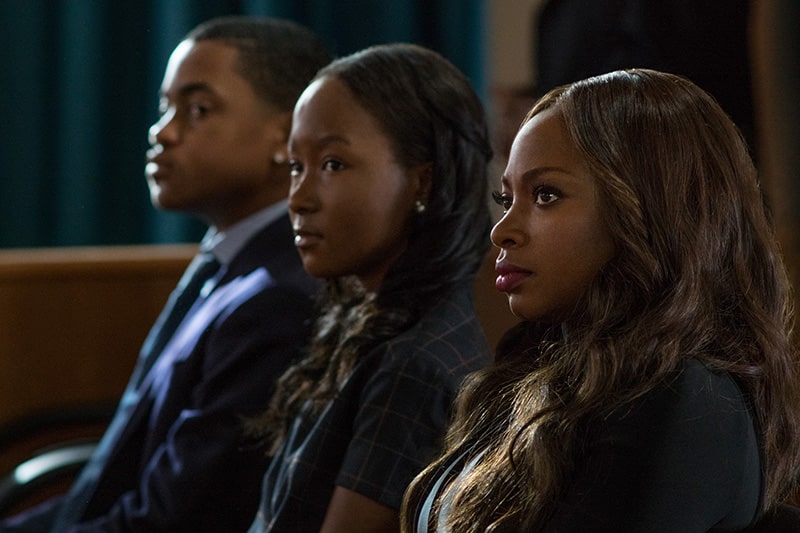 So I started watching the most recent season of MasterChef and got to witness the #BlackGirlMagic of both Yachecia and Eboni (Southside). MasterChef and two Black women to root for? Binging. Anyway, at some point Yachecia was the captain of a team that lost a challenge. Short version is that she had the chance to save herself or save six of her team members and then she herself would go head to head in a pressure test with the one team member she didn’t save.  She chose to save six team members. On a show where the goal is to send everybody else home, win your coins and cookbook, she saved six people. We ain’t even gon talk about her white male team member who got extremely rude and disrespectful and basically dared her to not save him. At any rate, Yachecia enters the pressure test and her opponent finds that she is missing a key ingredient. How you gon serve fish without lemon? How Craig? So ol’ girl asked Yachecia for some of hers! And Yachecia gave it to her. Enter all the hand claps and cries of “good sportsmanship.” Because that’s what Black girls and women get when we sacrifice ourselves, we’re encouraged and told that’s what we’re supposed to do. Ever notice we often seem to be the only ones doing it? So there I’m sitting watching the show that was supposed to get my mind off real life and I’m faced with the very real life phenomenon that is Black women’s continued self sacrifice. When do we get to save ourselves? When will others be called on to sacrifice themselves for us? Because we tired y’all. Exhausted.

Then I started watching Power and Tasha was like, “Oh you tired of watching Black women sacrifice themselves? Hold my piece.”

Let me tell you something, Power done frustrated me in fifty ‘leven ways all season. But these last two episodes made me hate all the writers and all the producers and most especially 50 Cent because I ain’t never liked him anyway. I pretty much only started watching because I wanted Naturi to win after them lil girls in 3LW tried to play her. I digress. Point is, I’m mad. Twice.

*spoilers coming so don’t blame me if your nosy self keep reading. I warned you.*

Before we get to Tasha and sacrifice, let’s talk about the part where the show sacrificed Raina. For no gaht damn reason. Not nan. Raina did not have to die. Period. Her death wasn’t necessary for the current plot. Whole lot of things could have brought Tommy, Ghost and Kanan back together. Because clearly, burning each other (with actual fire, not the clap), kidnapping folks’ kids, sending each other to jail and all that wasn’t enough to keep them apart. But the writers was like, nah. We need a Black girl body. Yo Raina, what you doing next Sunday? (I hear that’s actually how she found out, they called her into the office like, “it’s been nice but, you gotta die). So they kilt Raina. Not Tariq who folks can’t stand. I’m pretty sure I saw a Change.org petition going to have Tariq murked. Jokes people. It wasn’t Change.org. They actually tried to deliver it to Paul Ryan but you know dude is not in the business of accepting petitions. So Tariq stayed. And maybe only because we never thought we needed to petition to save Raina. Because even with all the chaos around her, even though every adult around her was acting a plumb fool plus her twin brother, we figured Raina was doing ok. Because that’s what Black girls and women supposed to do– be ok. When all about us crumbles. We supposed to be alright. Also, did anyone else just realize Tariq and Raina was twins in the last two episodes? Because I did. I later remembered that it was said way early in the series but the writers did a horrible job of conveying that. Plus, we Black. When you got twins, they gotta have that one name that refers to both of them. I ain’t never heard Tasha yell, “RiqandRaina.” Because that would have been a clue they was twins. Before y’all start talking about all twins matter and other groups call they twins like that, let me remind you I ain’t grow up with other folks in my house so I don’t know what they do. All I know is, my name been “EricandErica” my whole life. Along with a couple other sets of my twin cousins, “KeraandKora,” and “CourvoisierandCortez.” Where was the alliteration? Is Raina real name actually Taraina? Y’all know how we name twins. Also, yes. His name is Courvoisier. Say something.

But Power didn’t care nothing about all that. They needed a body. And Raina’s would do just fine.

So we get to the finale and Tariq continues to make Tariq type decisions. Instead of telling his momma ‘nem who killed his sister so grown folks could handle grown folks’ business, he decides to act like he don’t know nothing and handle things himself. Because he been so good at that in the past.

Fast forward and the dude who killed Raina is dead (Ra Ray, also a cop). And Tariq shot him. But we can’t even root for him because he the reason she dead.

But here comes the lamb.

In the aftermath of the shooting, Tasha instructs Tariq on what to do. She gives him explicit instructions on burning his clothes and cleaning his body right down to scrubbing under his nails with a toothbrush and peroxide.

Y’all. My heart broke. I bawled.

Because no one should have to know so much.

When Tasha gave Tariq those instructions, it was with a mind so heavy, a heart so filled and a spirit so exhausted.

She done gave those instructions too many times before. To James. To Tommy. Maybe even to her daddy. And even as I sit here and write, reliving the moment I heard her talking to Tariq just has me all in my feelings again. Maybe because in that moment I already knew what was going to happen. I already knew that Tasha was preparing both her son and herself for her to take the fall.

We see through the episode that Tasha never even gets a chance to start grieving because she’s consumed with so much else. Tariq. Folks gathering in her home to express their condolences. Revenge. Strategizing. Fixing it all. Fix it she does. Because by removing all evidence that Tariq pulled the trigger, the only thing left to identify Ray Ray’s killer is the murder weapon. Tasha’s gun. Which Tasha knows because she then asks her lawyer/lover for hypothetical advice about what he would tell her if she said she killed Ray Ray.

And because it isn’t enough that Tasha sacrifice herself, she does so at the additional expense of love since she handed over that retainer check with the quickness to her lover/lawyer after he tells her he can’t be both. What’s one more cross to bear?

Power is full of men. Full of men (and a boy) making the wrong decisions and full of Black women paying for them. Keisha. Raina. Tasha.

Power is full of sacrificial Black girls and women.

Folks often talk about the sins of the father visiting upon the sons. But rarely do they talk about how those sins visit upon the daughters. But Raina knows. Tasha knows.

R. Kelly is a Rapist. But You Know That.