Cult classic films Boyz in the Hood, Juice and Menace II Society have been both praised and criticized for their depictions of Black male experiences. In all of those films, women occupy little more than space fillers.  Shalika is just the ghetto girl who banters with Doughboy, Ronnie is the chick who gives Caine an outlet, and Shanice  is a byproduct of Ricky’s role as a teenage father. Outside of mourning Ricky, her role is quite limited. But in any urban setting, it is clear that Black women are far from backgrounds images. Films depicting urban Black girl experiences do exist but have failed to maintain the cult status of features like Boyz and Menace.  1996’s Set It Off is perhaps the most well known of such films but for real urban girls, the film often fails to hit home. How many of us have actually tried robbing a bank? There is a film that rings truer to the shared experiences of urban Black girls. The 1992 film, Just Another Girl On the I.R.T. was released one year after Boyz (1991) and one year before Menace (1993). This was arguably the best or worst position for the film. Likely the latter as Just Another Girl on the I.R.T. is the least known film among the three. For various reasons. Both Boyz and Menace had well known rappers and actors and bigger budgets. Boyz and Menace also played into concepts of Black male extinction. No one dies in Just Another Girl.  Perhaps that’s the point. More specifically, the failure to address the loss of Black female lives absent physical death contributes to a lack of life saving solutions.

Just Another Girl On the I.R.T. examines a considerable number of issues present in the lives of many girls and young women, including those in urban, suburban and rural settings. 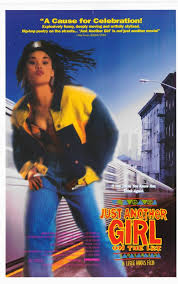 Through Just Another Girl on the I.R.T. we can examine:

Lack of reproductive choice or ability to execute one’s choice

Urban girl modes of self expression

The film is an analytical cornucopia for urban girl education, experiences, identity and resilience. But how often do we discuss it in the rich context available? If you’ve never seen the movie, I challenge you to do just that. Watch the film and let’s talk about urban Black girls.

Because All the Women Are Not White and All the Blacks Are Not Men: MBK, Intersectionality, and 1000+ Of Us Who Are Brave