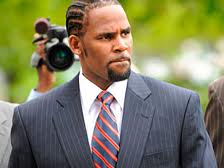 “This is a circus, it’s a national disgrace. And from my standpoint, as a black American, it is high-tech lynching for uppity blacks.”

“I will not provide the rope for my own lynching or for further humiliation.”

With those declarations, Clarence Thomas would help shape the narrative of discourse on sexual violence and Black women for the next twenty years. Thomas’ rhetoric brought with it recollections of an historical legacy that no one wanted to take part in– the social, political or physical lynching of Black men.

The release of R. Kelly’s new album, Black Panties, brought the R. Kelly trial back into the limelight. The album’s title alone was enough to galvanize (through social media) those who felt that Kelly has never been brought to justice on the many charges of child pornography he so publicly circumvented. By now, many know the general account.  In 2002, R. Kelly was initially charged with 21 counts of child pornography in relation to a video depicting R. Kelly having sex with a Black female minor. The racial implications of the case were evident from the start with the prosecution and defense each accusing the other of attempting to racially stack the jury in their favor.[i] Ultimately, Kelly’s jury would be comprised of eight (8) whites and four (4) Blacks, nine (9) men and three women (2 Black, 1 white).[ii] After six years of what felt like the longest self-imposed waiver of speedy trial, R. Kelly was found not guilty of all fourteen remaining charges. [iii] A delayed process is often used as a tactic in sexual violence cases. Waiting so long ensured that, in the event she took the stand to testify, Kelly’s victim, by then a grown woman, would visually contrast the idea of a helpless, uniformed teenager. Such a strategy also increased the likelihood that media attention would subside over the years. Still, Kelly’s acquittal is not uncommon. An overwhelming majority of sexual assault/sexual abuse cases are never reported. An even fewer percentage of cases result in conviction and only approximately three (3) out of every one hundred (100) sexual assault perpetrators will ever serve time.[iv] But how does Kelly’s case connect to Justice Thomas’ testimony before the Committee on the Judiciary, United States Senate?

Historically, race specific rape laws posited universal white female victims and universal Black man perpetrators.[v] A rapist was defined as “man who unlawfully and carnally know [sic] a white woman against her will or consent.”[vi] The claim of sexual assault/impropriety by a Black man justifiably instilled fear, within the Black community, that the accused would be lynched or castrated long before they could be tried by jury (almost certainly not one composed of their peers). Contrarily, no such punishments were meted out in the event a white male perpetrator raped a Black female. The 1955 murder of Emmet Till illustrated that the appearance of impropriety towards a white woman was grounds for lynching. False claims of rape against Black men were often fabricated under various racially motivated pretenses. The narrative Thomas invoked relegated Anita Hill, a Black female, to the role previously occupied by white women and men. In claiming that Anita Hill was attempting to politically lynch him, Thomas was accusing her of race, sex and class based persecution. In front of the world, Thomas played the sexualized race card. That same card would later serve as R. Kelly’s trump card.

Much like Thomas, Kelly’s social and political defense would paint his victims as Black girls and women who were simply out to get him based on his status as a successful Black man. Both men placed their Black female victims into various identities created solely for, and occupied by, Black girls and women. Anita Hill, an educated, successful, single Black female would be relegated to the Educated Bitch while Kelly’s young victims were painted as Jezebels and Gold Diggers.

To provide some context, the charges against R. Kelly were anything but isolated events. Kelly has been accused of various acts of sexual abuse and impropriety. In addition to the highly publicized case, Kelly was sued for having sex with at least 3 underage girls (Tiffany Hawkins, Tracy Sampson, and Patrice Jones), videotaping a sexual encounter with an adult female (Montina Woods), and marrying a 15 year-old singer (the late Aaliyah Haughton). Each of the aforementioned cases was settled for various sums of money with Haughton being paid a token sum after the marriage was annulled. Another singer, Deleon Richards, also says she had a sexual relationship with R. Kelly when she was a teenager. After 14 years of working with Kelly, his publicist quit amid allegations that Kelly had a sexual relationship with her daughter. Kelly was also charged with 16 counts of child pornography after pictures of a nude underage girl were found in his Florida home during Kelly’s arrest for the Chicago charges. It is worth reiterating—while Kelly was being arrested for charges of child pornography in Illinois, officers found additional child pornography at his residence in another state. The Florida charges were later dropped after the judge suppressed the photos in that case due to technicalities of the search warrant.

Through all of the media attention, Kelly’s social and political defense remained the same. He portrayed himself as a successful Black man who was being targeted because of his wealth. In drawing constant attention to his persecution based on being a wealthy Black man, Kelly managed to keep the focus off of his modus operandi—selecting his victims precisely because of their race, sex and economic status. R. Kelly chose victims in such a way that he could always play the sexualized race card. Because of their socioeconomic status, his victims could always be categorized as Gold Diggers. Because they were Black, his victims could be identified as Jezebels. Much like her race and education would allow Anita Hill to be categorized as the Educated Bitch. And who cares about, or listens to any of them? Even on a national stage.

[iii] R. Kelly’s defense team never invoked his right to a speedy trial. Seven of the original twenty-one charges were dropped due to a technicality on the wording of those charges.

I’m Here for all the Hot Girl Summers. The Megan Thee, Hennessy and Plan B Summers.

Between the Lines of Victory: Black Women, the 113th Congress and the SCOTUS

Sharmeka Moffitt, Tawana Brawley and the Intersections of Race, Class and Gender

I Don’t Get It: Confessions of a Male Observer of Sexual Harassment Discussion (Gordon Braxton)